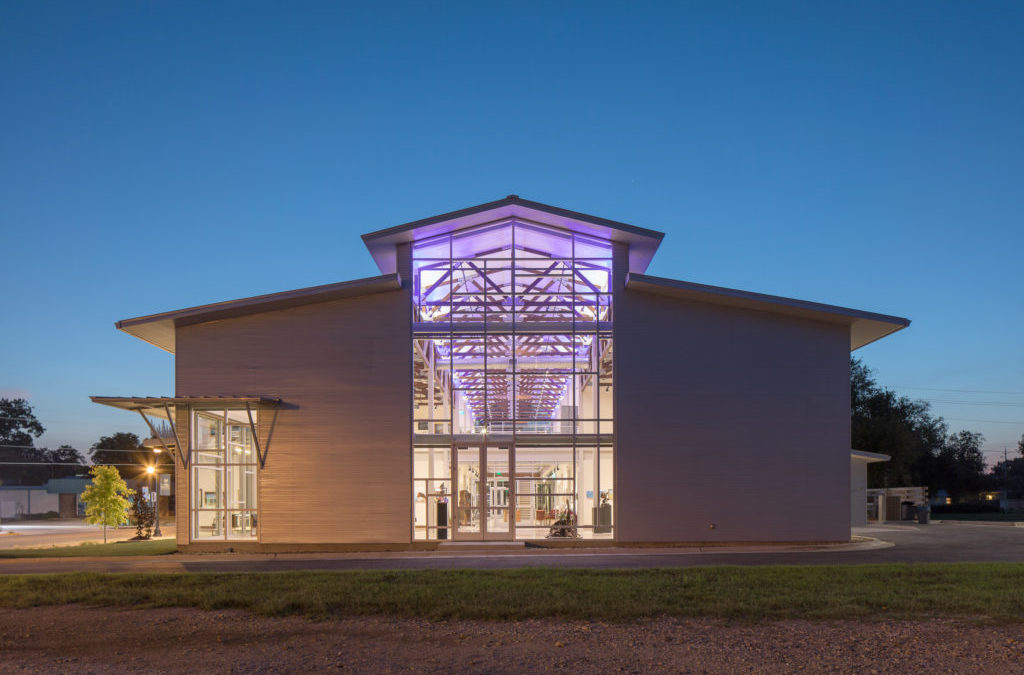 The Lost Pines Art Center, with its beautiful use of glass and open space, serves as a beacon of light and a hive of activity to those entering Downtown Bastrop from the east to attend a meeting at City Hall, or a gathering at the nearby Convention Center. The Center is also putting Bastrop “on the map” as one of the foremost arts communities in the Southwestern United States.

The goal of the Lost Pines Art Center Project was to revitalize the community spirit of a Texas town where a quarter of its residents had their homes devastated in 2011 by the most destructive wildfire in Texas history. The team wanted to create a central location for Bastrop’s vibrant and growing arts community.

In the initial stages, the project brought many members of the community together to raise money for its completion, and the inclusion of major donors as well as the organization of grass roots events encouraged broad participation in the region. Events ranged from a “fence-raising” to the Artful Afternoon Garden Party and Fine Art Auction. The project was also given numerous grants, including a $488,000 grant from ArtPlace, a national organization, to cover the demolition of the existing building and the repurposing of all materials needed for the new construction.

The Lost Pines Art Center is a boost for the local art community as well as a stimulant to the creative economy of Bastrop. The Center also serves as a destination point for the City and is impacting the local economy by bringing in thousands of visitors who spend money dining, staying in hotels and bed and breakfasts and shopping at other local mainstays.

The Center is a dynamic field-trip destination for the local school children, which not only impacts the community in the present moment, but plants seeds of local pride in those who visit and nurtures the creativity of a future generation of Texas artists and patrons.

From a visual standpoint, the project has capitalized upon a great opportunity by taking an existing area of concern for the city and creating something new, beautiful and vibrant out of a site that was in disrepair and not being utilized to its full potential. The East-facing facade of the building was intentionally designed to conjure the image of a lantern when the building is lit up at night, guiding visitors into the heart of Downtown Bastrop when approaching from Houston or other population centers to the East.

In addition, there are several on-site Silos that are being repurposed into working art studio spaces.

The Lost Pines Art Center has transformed and revitalized downtown Bastrop by providing an art gallery, gathering space with a retail shops, classroom spaces, artist studios and a coffee shop/wine bar. The center has spurred economic development, as well as invigorated the local creative economy. “This is not about a bunch of folks sitting around painting on canvas, it’s much more than that,” Mark Rose, Chair of Lost Pines Art League stated, “It’s more than art as expression. It’s also art as a business and art as community.”

The Lost Pines Art Center also looks to impact the next generation. It functions as a destination for school children to be exposed to art in a rural location. “A place to view art, to make art, to teach children,” stated Karol Rice, board member of the Lost Pines Art Guild.

In its first nine months since its opening, the Art Center has had over 10,000 visitors in a town with a population of 8,500!